Read all about it: Upcoming publication of my thesis

Finally, after long months of crafting my Master’s thesis with which I obtained my M.A. in Audiovisual Translation from Universidad Autónoma de Barcelona in 2009, I am pleased to announce that Editorial Académica Española will soon publish it under the title Redacción técnica comparativa: Análisis comparativo de los estilos de redacción en textos técnicos en español en los últimos 40 años (Comparative Technical Writing: A comparative analysis of writing styles in Spanish technical texts in the last 40 years). This 96-page publication will be available in Spanish.

A sample cover is shown below: 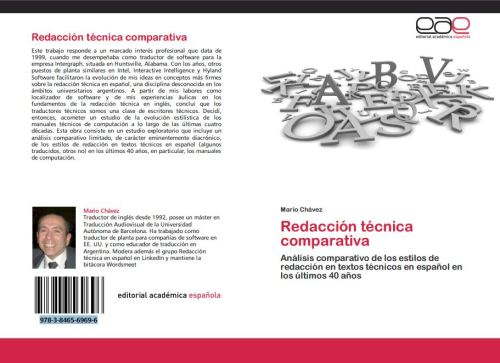 I chose this topic because I have observed that technical manuals —especially computer manuals— written in Spanish have undergone significant changes in style for the last four decades. In the 60s and 70s, engineers with a solid knowledge of Spanish and good writing skills wrote computer manuals and were responsible for preserving the authoritative, master-to-student style that is traditional in Spanish handbooks. This style started to change in the late 80s and early 90s with arrival of computerized typesetting and the globalization of manual authoring.

The formal, authoritative style in official Spanish technical publications is part of the personality of a well-written technical manual, akin to the corporate dark suit and necktie Latin American businesspeople are known for. Even in today’s American acculturation of global commerce with its casual wardrobe and in-your-face colloquial speaking mannerisms, this traditional model of authoring Spanish manuals is being preserved and cultivated as a sign of premium quality.

I will be happy to share some excerpts translated in English with my readers who so request it.

This site uses Akismet to reduce spam. Learn how your comment data is processed.